Brooklyn Nets and NBA All-Star Ben Simmons has undergone back surgery for a herniated disk in his lumbar spine.  Simmons reportedly injured his low back during his rehabilitation to return to the court after his trade from the Philadelphia 76ers.

Simmons was slated to return in Game 4 of the Nets series with the Boston Celtics.  According to reports his condition worsened and he has had a microdiskectomy to remove the herniation.  Simmons was experiencing low back pain and leg pain, typical symptoms of a lumbar disk herniation.

A herniated disk occurs when the gel-like inner portion of the disc ruptures or breaks through the outer covering of the disc and presses on a nerve. This causes sciatica or leg pain.  As you can see from the illustration below, pinching of the nerve can be quite severe and extremely painful.  Herniated disks are most common between L4-5 and L5-S1.  Treatment is usually conservative, including anti-inflammatory medication, physical therapy and epidural injections. 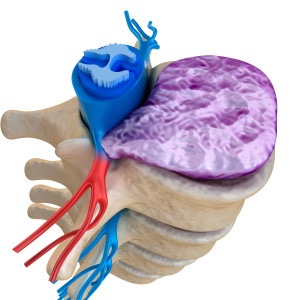 If non-operative treatments fail, surgery is indicated.  A microdiscectomy is the surgery of choice and removes only the portion of the disk protruding and compressing the nerve.  The entire disk cannot be removed as it still needs to function as a shock absorber between the bones of the spine.  Complete disk removal will result in chronic back and leg pain and is not an option.

The microdiscectomy surgery is performed through a small incision in the back approximately 5cm in length over the area of herniation.  It can be done in less than one hour and has a success rate of 95-98% in the general population.  Recovery is usually 6-12 weeks with post-operative physical therapy required.

Professional athletes create a unique problem for recovery from disk surgery.  The success rate experienced in the general population cannot be extrapolated to the professional athlete.  The physical demands placed on the body by a professional athlete are certainly not normal.  The sports world is littered with examples of back injuries ending or limiting careers.  Tiger Woods is the most recent example, with his four back surgeries.  A host of other athletes such as Larry Bird, Fred Couples, Dwight Howard, Tony Romo and Marian Hossa have had their careers truncated or ended as a result of herniated disk.

There is data that show returning to play after microdiscectomy is likely.  A study by Watkins found the chance of returning to play can be has high as 89%. A study by Hsu revealed there is an 82% return to play. However, the data is weak and more prospective, randomized research is needed in this area.  Return to play is also a very different concept compared to returning to the same level of play.

Reports from Brooklyn state that Simmons should be ready for the start of the NBA season in the fall, if all goes well with surgery and there is no nerve damage from the initial herniation a few weeks ago.  This may be an unreasonable expectation.

Simmons has a number of factors in his favor for a full recovery.  He is young and healthy and his physicians are removing the disk quickly, before any nerve damage can occur.  Simmons has access to the best doctors and trainers in the world who will give him the best shot at 100% recovery.

Unfortunately, there are issues that may limit his function and/or his career.  The risk of re-herniation is number one on the list.  The recurrence rate of a herniated disk can range from 10-15% in the general population.  Simmons is not part of the general population.  He is an elite athlete playing in the most elite professional league in the world.  There are no reliable data on the risk of reherniation of a disk during an 82 game NBA season.  The stress on the disk is unimaginable.

Another issue is chronic pain.  Though rates of post-operative chronic pain are low for this condition, Simmons could experience ongoing chronic low back pain as a result of the herniation and the enormous stress he will place on his low back and nerve during the season.

Recovery after any surgery, especially back surgery, in the professional athlete is a complex issue.  A three-month recovery for Simmons is very optimistic.  Rushing him back to the court could have catastrophic consequences.  It is more likely that full recovery will take 6-12 months at minimum.