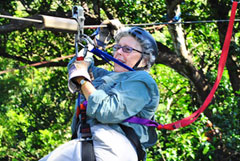 For several months I was having difficulty with my walking, and I had considerable pain in my back. As a result, my primary care physician sent me to pain management where a study was done. I was diagnosed with Spinal Stenosis. At that point I started having shots three to four times per year. That all started in late 2004. It went on for several years, but gradually the times between shots were shortened, and they were no longer effective. During those years, I was also doing physical therapy. Now what?

I was referred to Dr. Banco, a spine specialist, and it was decided that surgery was the only recourse left. It was not an easy decision, but for me it was the only one left. I did not want to be in a wheelchair and in pain for the rest of my life. So, in May 2011 Dr. Banco performed a spinal fusion on my back. Nine months later, after recuperating and doing a lot of physical therapy, I was flying high in Costa Rica on a zip line, horseback riding, and even white water rafting!! All things that I had never done before!

My quality of life has significantly improved. I cannot say that I am completely pain free, but I am able to walk erect, and get on with my life.